The concept of creating life, or at least a mechanical machine that can replicate the actions of humans and animals, (as well doing the housework) has been a popular concept in science, literature, and the arts. Have a look at the timeline below for important events:


350 B.C. — NaN- The Pigeon.
The Greek mathematician, Archytas of Tarentum builds a mechanical bird dubbed "the Pigeon". The device was a bird-shaped model, propelled by steam. Click for more


222 B.C. - Ktesibios/Tesibius. Water clocks and regulators.
Water clocks and regulators Whilst at first sight, water clocks don’t sound robotic, they are relevant to robotics for two reasons. Firstly, they are examples of feedback systems, and secondly some early intricate robotic devices acted as water clocks. It is worth pointing out that a bucket full of water with a hole in it is a feedback system. The flow of water that comes out through the hole is determined by the pressure exerted by the water, which is the water weight divided by the area of the hole. So, as water comes out, the weight of water and hence the pressure is reduced so the water comes out less quickly. This is relevant to perhaps the first man-made feedback system: the water clock of Ktesibios in around 250 BC. The aim was to have a measure of the time since the sun rose and this was achieved by having a bucket which was emptied initially and into which water flowed at a constant rate – the height of water in the bucket indicating the time. The difficulty was to ensure the water flowed in at a constant rate, for which a second bucket was provided, with a hole in the bottom. But as noted above, the flow from such a bucket varies with the amount of water in it. The solution: to keep the top bucket full. Then, assuming atmospheric pressure variations were small enough, a constant flow of water left this bucket. So as to ensure the second bucket was always full, a float valve was used: if the water level dropped the float dropped thereby opening a valve to let water into the vessel. Water flowed until the bucket was full again.


10- Hero of Alexandria. Self opening temple doors, theatrical robots.
Hero of Alexandria was a Greek Mathematician and Engineer who devised ‘automata’ and theatrical robots. ‘Automata’ can be used to describe devices which use mechanics or pneumatics, for example, the automatic opening and closing temple door. He also constructed a three-wheeled cart powered by a falling weight which pulled string wrapped around the cart’s axle. The strings were wrapped in different directions which then determined the way the cart (robot) moved. This string-based control is equivalent to a modern day programming language. Click for more


1200- Al-Jazarī. Elephant water clock.
al-Jazarī was a scholar, inventor, mechanical engineer, craftsman, artist and mathematician who lived during the Islamic Golden Age. He made an Elephant Water Clock for the King of Diyarbakr in present-day Turkey in about 1200 CE, i.e. over 800 years ago! It’s not only a clock that tells the time but also a pioneering robotic machine. Click for more 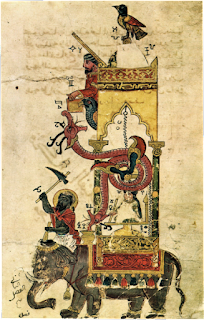 The elephant clock from Al-Jazari's manuscript.


1515- Leonardo da Vinci’s Lion (Codex Atlanticus).
Leonardo Da Vinci’s mechanical lion was presented as the star gift in a pageant in honour of François, the new king of France in 1515. Da Vinci also designed a mechanical knight, able to bend its legs, move its arms and hands, turn its head and open its mouth. It could also ‘talk’ by using an internal automatic drum roll and is often claimed to be the first ‘programmable’ computer. Click for more


1739- Vaucanson’s Duck.
Jacques de Vaucanson (1709 - 1782) was a French engineer credited with creating fine automata that some regard as the world’s first robots. His defecating duck ‘ate’ food out of the exhibitor’s hand, swallowed it, digested it, and excreted it, all before an audience. He is also credited with creating the first completely automated loom. 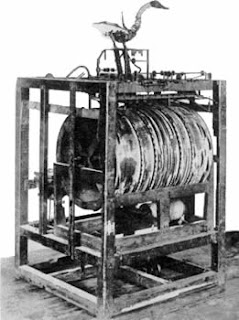 1770- Jaquet-Droz ’scribe’. Clockwork automata: writing, drawing and playing music.
The most complex of three automata by Pierre Jaquet-Droz, Henri-Louis Jaquet-Droz and Jean-Frédéric Leschot. It is able to write up to 40 letters of text which is coded on a wheel. The actual writing is done by a goose feather which the scribe dips in ink. Click for more


1770- The Turk.
Wolfgang von Kempelen constructed The Turk, supposedly an automaton which could play chess. The Turk played several games during demonstrations across Europe and often won! In fact there was space under for a man to recline inside the machine to make it work - Certainly a good example of telemanipulation. 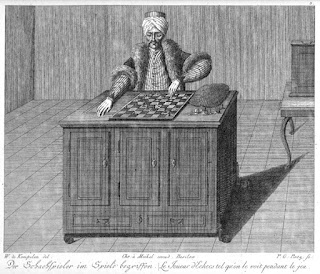 
1817- Frankenstein published.
Frankenstein (or The Modern Prometheus), written by Mary Shelley and published in 1818, is often considered the first true science fiction story. It tells the tale of scientist Victor Frankenstein who is horrified when he creates life in the form a grotesque creature. The story has been adapted into many films (the first in 1910) and TV shows.


1864- US patent with the word "Android" issued.
This was patented in reference to miniature human-like toy automatons. 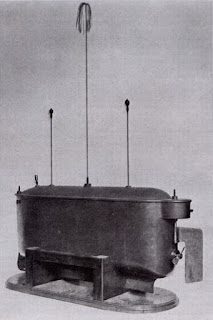